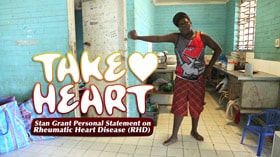 “Indigenous people still suffer far more greatly than any other section of the Australian population and Rheumatic Heart Disease is an extraordinary example of this.”  ~ Mr Stan Grant

“Closing the gap has been a headline. It’s been a slogan, that sadly we have not seen much delivered. It’s one thing to have the commitment, and the will, and indeed the money that is spent every year as well, around $30 billion. $30 billion is spent each year on indigenous welfare programs, to put it broadly, in Australia, and yet, we are still seeing across every possible socioeconomic indicator, whether it’s health, housing, education, employment, whether it is infant mortality, whether it is having the lowest life expectancy in the country, or the highest rates of incarceration, indigenous people still suffer far more greatly than any other sector of the Australian population. Rheumatic heart disease is an extraordinary example of this.” Mr Stan Grant.

“Here was a disease that was fairly widespread in the mainstream community, across most populations, and now it is prevalent primarily amongst these small, minority, Indigenous populations. What does that tell you? It tells you that people haven’t had the awareness, or haven’t had the education. They haven’t had the access to healthcare, to prevent what are entirely preventable diseases.”

“What does it tell us? It tells that you need greater political clout. We need greater political involvement. We need indigenous people in Australia to have access to education, to be able to gain the skills and the qualifications to go back to their communities and make a difference. We need to be able to look at a political process, a process of raising awareness, and having buy-in from the indigenous population here before we can really get around to tackling these crippling issues.”

“Rheumatic heart disease stands out as a great example of this, because they’ve been able to make a difference in New Zealand, because in the broader Australian population, it was effectively eradicated. Yet, in the indigenous population, it remains, so it stands as an extraordinary example in and of itself of just how much more needs to be done, not just in that area, but as a symbol of the broader challenges in Australia.”

“When you are dealing with specific issues that really do effect the indigenous community more than anyone else, and there are the issues of lack of access to resources, lack of education, lack of healthcare, often very remote communities as well. This presents yet another barrier, presents yet another obstacle, so you need to listen to the people. You need to hear what the people have to tell you. You need to involve the people themselves in the outcomes if you are really going to make a difference. All the money, all the goodwill, all the policy in the world is not going to make a difference, unless you can bring the people with you. That is absolutely paramount.” Mr Stan Grant Personal Statement on Rheumatic Heart Disease.