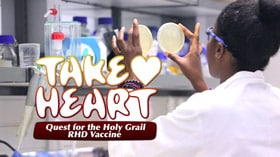 The so-called Holy Grail of RHD prevention – a Group A Strep vaccine.  But this dream is proving difficult to realise.

“It’s clearly a disease which is associated with social deprivation. I don’t think anybody denies that that is the most significant factor relating to the condition. If a vaccine were shown to be effective, it would be the holy grail for finally eradicating this condition in Australia and New Zealand.” Professor John Frazer

“Rheumatic fever and rheumatic heart disease were very common around the world. Those rates have dropped away significantly. The question you have to ask is, “Why have they dropped away significantly?” A lot of that is around the better delivery of health services, removal of the social deprivation factor in those countries that now never see a case of rheumatic heart disease. The likes of the US and the UK, for instance, you can talk to a GP, and they’ve never seen one in their entire career. Whereas, fifty years ago, it was fairly common.” Professor John Frazer

In the twentieth century, all over Europe people had rheumatic heart disease.

“In the twentieth century, all over Europe people had rheumatic heart disease. Melbourne in the 1930’s, white-Caucasian children were filling the wards of rheumatic fever, and that’s all gone away. It just happens, at the moment in New Zealand, it’s Māori and Pacific people who are getting the rheumatic fever. It’s probably something in the human genome that makes someone at risk, but it’s probably the social living conditions that are the bigger factor than the genetic factor.” Associate Professor Nigel Wilson.

“Research is very important, because we don’t know the answers. Primary prevention, for example, it has been successful in Cuba, in the Caribbean, even in the United States of America. The components of it, was it the sore throat swabbing? Was it the public awareness? Was it better where the health professional was more aware of rheumatic fever? The individual components of it is very hard to tease out, and I think New Zealand’s taken the bold step of just implementing the primary prevention program. It scientifically had to sort out, and other countries will be looking at it very carefully, especially if it is successful to reduce rheumatic fever. The more it’s documented, the more scientifically you approach it, then it’s of more use both in New Zealand to continue, and in other countries.” Associate Professor Nigel Wilson.


“One of the things that makes Streptococcus very difficult to make a vaccine against is that there are hundreds of different strains of Streptococcus,” explains Professor Michael Good.

“So the individual can be exposed to one strain and they’ll develop immunity to that strain but then is totally susceptible to another strain they might encounter the following week or month.  Therefore because there are so many different strains, it takes a long while to develop immunity to all of them.” Professor Michael Good.

“One of the the other issues we have been faced with, with the vaccine is around safety. One of the critical questions that has been probably around for the last fifty years when people started to develop vaccines against Group A Strep, was the potential for the vaccine itself to cause the disease. There’s been a lot of questions asked about whether these vaccines are likely to generate an auto-immune response themselves. The last thing we want to do is develop a vaccine which is going to increase the rates of rheumatic heart disease and rheumatic fever, rather than reduce it.” Professor John Frazer

“People have been trying to make a vaccine for Streptococcus for a long while. There’s been a lot of progress in recent years, and our laboratory has been testing a novel approach to a streptococcus vaccine, which we’re putting into a human trial.” Professor Michael Good.

“I’m very confident that a vaccine will be created, because we know more and more now about the biology of the organism and how it avoids natural immunity, than we ever did before. Australia and New Zealand are working very closely together on the vaccine. Our Indigenous populations in both countries suffer a very high rate of Streptococcus pathology, and the governments in Australia and New Zealand are committed to developing this vaccine.” Professor Michael Good.

As a result, the passage of a safe RHD vaccine to market, is likely to be many years away yet.

To find out more about Take Heart ‘About’

TWEET IT OUT ‘#takeheartmovie Is the Group A Strep Vaccine the Holy Grail for solving RHD? #RHD’

Sign Up to receive updates and current information on Take Heart