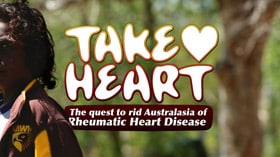 Rheumatic Heart Disease, or RHD, is a largely invisible disease that threatens the lives of over 30 million children and young people around the world.

Take Heart: The Quest to Rid the World of Rheumatic Heart Disease lifts the lid on this life-threatening disease that is 100% preventable.

What disease starts as a sore throat in children and ends with open heart surgery, heart failure, stroke, and premature death?

“If we had a similar outbreak of measles or meningitis, or even Ebola around the world, that would make the headlines and the news, whilst this is not something that the general public is aware.” Dr Bo Remenyi

“RHD impacts on the most vulnerable people in our community, and the consequences of this are disastrous.” Dr Lance O’Sullivan

“My legs started to swell, and the rate of my heart was going up, and it was really pumping,” reports teenage Carlisa who is living with RHD in the Northern Territory of Australia .

“When I was around 10 years old, I tried to stand up to go get something, but my legs just fell to the ground,” recalls Melesui, a 17 year-old living with Rhuematic Fever in Auckland, New Zealand.

“I don’t want to see how the kids get rheumatic heart disease,” states Liddywoo from Darwin, who has has three open-heart surgeries related to RHD.

Rheumatic Heart Disease was once wide-spread in all children across Australia and New Zealand. Now, it is almost exclusively found among young indigenous Australian, Māori, and Pacific Islanders.

” How come it’s coming here instead of down south?” questions James, the father of 7 year-old Brooklyn who has recently been diagnosed with rheumatic Heart Disease.

“There’s a number of important factors. One of the reasons is the housing,” replies Brooklyn’s paediatric cardiologist Dr Bo Remenyi.

“How many people do you end up with in this house?” asks director Mike Hill as he films Liddywoo’s 2 bedroom house.

“Ten, especially the bedroom and this room. Five here, five there,” replies Liddywoo.

“We’ve got four girls in one bedroom, me and my husband in the other bedroom, and the boys in the lounge. This is where Melesui got the rheumatic fever,” reports Melesiu’s mother Veisinia.

The lives of almost 2% of indigenous Australian, Maori, and Pacific Islanders are threatened by RHD.

“How do you feel about having your surgery?” asks Associate Professor Andrew Steer.

“He could have died at any time if we had waited any longer,” states Associate Professor Yves d’Udekem.

“The cost in life years, the cost to a family, is big, but it’s preventable; it doesn’t have to be this way,” implores Dr David Jansen.

“Sometime I talk to myself: ‘Did I done the wrong thing?'” asks James.

“If we could eliminate Group A Streptococcus, there would be no rheumatic fever,” reflects Associate Professor Nigel Wilson.

“We’re talking about the cheapest antibiotic in the world, penicillin.” Professor Jonathan Carapetis

” I think this is critical to raise awareness, both in the community level but also the national level, to create will to put this disease in the history books in Australia and in the rest of the world.” Dr Bo Remenyi.

“I’m too young to die.” Carlisa

Learn more about the Take Heart Project on the ‘About’ page.