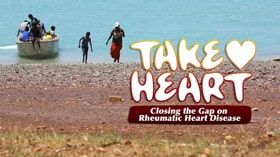 Whose problem is this to solve?  To Close the Gap, health care will need to be delivered to at-risk children, adolescents and young people where and when they need it, social housing conditions will have to be improved to reduce overcrowding, and education programs designed to improve understanding of the disease will have to be deployed.

Australia, the worlds 6th largest country by size has been inhabited by indigenous Australians for over 40 000 years. Since its settlement as a British prison a little over 200 years ago Australia has developed a liberal democratic political system. Today Australia holds the worlds 4th largest economy. The 5th highest per capita income and the 2nd highest human development index ranking, which means it’s considered to be amongst the worlds most equal societies. Why then do Australia’s first people have amongst the highest rates of a preventable disease in the world.

“When you look at the statistics around indigenous health in Australia, New Zealand and Pacific Islands as well it condemns these communities. It condemns the governments of these countries. The minority people in those countries, the first peoples of those countries still suffer so horrifically when it comes to healthcare. Rheumatic heart disease is an extraordinary example of this.” Mr Stan Grant

“Here was a disease that was fairly widespread in the mainstream community across the most populations and now is prevalent primarily amongst these small minority indigenous population. In this community in terms of the people haven’t had the awareness, they haven’t had the education, they haven’t had the access to healthcare to prevent what are entirely preventable diseases. You put this in the same basket with diseases like polio which were once very common place and have now been eradicated except once again in indigenous communities” Mr Stan Grant

To close the gap, healthcare will need to be delivered to at risk children, adolescents and young people where and when they need it. Social housing conditions will have to be improved to reduce over crowding and education programs designed to improve understanding of the disease will have to be deployed.

“Complex situation in remote indigenous communities is how people in those communities have the benefits of such economic development, the housing and also the economic development side while also being able to have strong culture. Also have their links to traditional practices such as hunting, bush medicines, bush food, which is something that is absolutely entritic to their traditional culture but also living in circumstances where there isn’t poverty, where there’s good education.”

“Of course that’s accountable and I do think that when you look at some of the initiatives and the arts for instance, and you go out to some of the local communities and look at art centers and the cultural-ism being run and directed by indigenous people. Not so much non-indigenous people. That’s an enormous economic benefit to those indigenous families who are part of that. Potentially, you could have a whole connection of remote indigenous communities where they’re thriving with a number of economic initiatives that are making them independent financially and living in circumstances where they literally have the best of both worlds.” Professor Bart Currie

Clearly, we have a problem in this part of the world – the lives of thousands of young people are threatened.

But there’s also a solution – this disease is entirely preventable

So whose problem is this to solve?

Ultimately, if we want to Close the Gap and authentically lay claim to an equal society – then we must view this as everyone’s problem.

Watch the Take Heart short film What is RHD?

Tweet it out and be part of the solution ‘#takehearttv short film ‘Closing the Gap’ (add link) and authentically lay claim to an equal society then we must view this as everyone’s problem.’