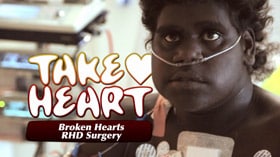 “A sore throat in a child must not be neglected, must not be ignored. Because if it is caused by strep it could indeed lead to heart disease. If  the child gets a penicillin injection it stops it, almost abolishes it.  The reason we have not been successful in using penicillin is because a lot of people are not aware that a sore throat in a child could lead to a broken heart.” Professor Bongani Mayosi

“In many of our practice here, many patients coming to us, they usually come in late having developed already shortness of breath and swelling of the body and often when that happens the next thing that is needed is actually an operation.” Professor Bongani Mayosi

Rhuematic Heart Disease surgery is NOT a cure.

“There can be a whole combination of symptoms, most commonly it’s the fever and the joint pains. All those symptoms will get better. But there’s one other part of the body that’s affected often in rheumatic fever and that’s the heart valves.” Professor Jonathan Carapetis

“If the disease is not recognized early and preventative measures are not put in place then that person will need to have cardiac surgery. When I think about cardiac surgery for rheumatic heart disease I think about two types of surgery really. One is replacement of the valve and then the second type I think about is valve repair where the surgeon goes in and fixes the valve so that it works correctly without having to replace the valve. I think that’s a really important distinction because of the implications.” Associate Professor Andrew Steer

“Edward required his first open heart surgery at age 8. He had to make the long journey down to the Royal Children’s Hospital in Melbourne. By age 9 Edward required his second open heart surgery. Three of his cardiac valves had to be repaired. The mitral, aortic and tricuspid valve. He really spent around age 13 to age 15 barely being able to walk around. He was very limited in his activities. Age 15 when I talked to him about needing another heart operation he knew that he couldn’t live like this. This time there was no option for repairing. The only operation that was an option for him is to replace his heart valves with a mechanical valve.” Dr Bo Remenyi

“Edward if we don’t do anything would die suddenly or just progressively suffocating in a matter of weeks. His heart is really at the end of what he can cope but he’s got absolutely no choice, he’s got nowhere to go and he has to have it done relatively quickly.” Professor Yves d’Udekem

“It’s unbelievable that it is one of the most prevalent diseases of the world. There are hundreds of thousands of new cases every year and it’s amazing to see how little research is done on these patients.” Professor Yves d’Udekem

“The tragedies are that it affects kids, that we know the cause and we know how to get rid of it.” Associate Professor Andrew Steer