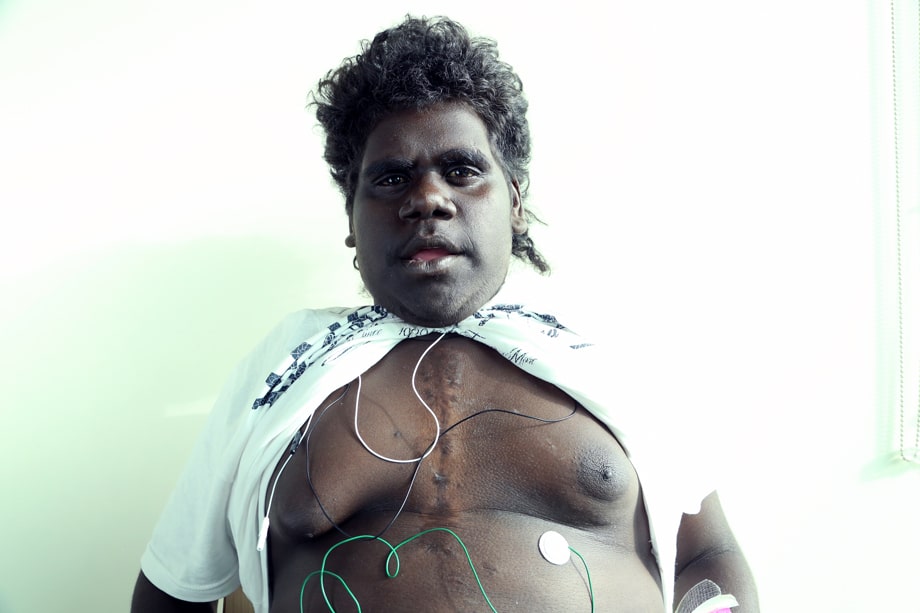 From sore throats to broken hearts

The disease starts as a simple sore throat, but ends up killing more than 1,000 people globally every day.

LIDDYWOO MARDI: By playing water, mud and in the rain when I was little boy. My mum told me not to play in the mud, but I couldn’t listen to her.

It progressed to heart disease, and before his most recent of three open heart surgeries, he’d cough relentlessly and wheeze with each breath.

LIDDYWOO MARDI: Walking around, playing with my brothers, hunting, spearing.

RACHAEL BROWN: But he’s one of the lucky ones. You might be able to hear the faint sound of his little lifesaver.

LIDDYWOO MARDI: The noise in my heart is my grasshopper. They removed my old valve and replaced a new valve, mechanical valve.

RACHAEL BROWN: The grasshopper is your constant little companion, I suppose?

RACHAEL BROWN: The mechanical valve in his heart ticks as the valve, like a little door, opens and shuts.

Liddywoo Mardi is not in the clear though. He takes daily blood thinning medication to ward off a stroke or heart attack, and he has weekly blood tests.

Over the past two years he’s grown up on film, hoping through the Take Heart documentary, that other children won’t make the same mistakes.

LIDDYWOO MARDI: Not to play in the rain and mud otherwise they might end up like this, sick.

RACHAEL BROWN: It starts as a common sore throat, strep throat, or as skin sores. It can be transmitted through overcrowded housing, close sleeping arrangements, sharing towels, or the absence of early referrals to a health clinic.

BO REMENYI: People get rheumatic fever then the little doors inside the heart get damaged, the doors don’t open and close normally and it allows the blood to go backwards rather than forwards.

And that eventually leads to heart failure, being short of breath, swelling of the arms and legs and just not being able to walk around or play around and eventually it can lead to death.

BO REMENYI: The Northern Territory has the world’s highest rates. Approximately 2 to 3 per cent of all children and young adults have rheumatic heart disease.

RACHAEL BROWN: She says heart surgery is a solution, but it’s expensive and dangerous and she says the focus should be on prevention.

This can be achieved, says Dr Remenyi, though better housing, education and access to health care.

Director of the documentary, Mike Hill, says he took on the project because not enough attention is being paid to the disease.

MIKE HILL: But when you talk to Indigenous Australians, almost everyone that you talk to in that group will have some sort of personal connection.

RACHAEL BROWN: But Mr Hill says their stories are being lost in translation, or drowned in competing public health messages targeted at Indigenous communities.

He wants to see the disease dealt with as a higher priority on the public health agenda.

MIKE HILL: We’re hoping it’ll become an election issue, so that the eradication of RHD becomes a priority in Australia in a similar way to what’s happening in New Zealand at the moment. And most importantly, at a community level for communities affected by this, they have a better understanding of how to prevent the disease in the first place.